TATA was established since 1984. Our work experience range from the building of a simple factory to a hightech chemical plant. From office building to 5 star hotel.

Established in 1984, PT. Tatamulia Nusantara Indah is one of Indonesia's leading general contractor, offering integrated civil engineering and construction support service. The company's involvement in residential, commercial, industrial and institutional building projects has advanced its expertise and experience in the construction domain. It offers general contracting and design-build services.

PT. Tatamulia Nusantara Indah, more commonly known as TATA, began from a modest, rented office space with 10 employees. The company has grown by leaps since, today it employs over 1200 personnel with branch offices in major cities across Indonesia.

The company plays a major role in Indonesia's rapid urbanization and development. Ranging from factories and office builds, to 5-star hotels. Some of its work include, Gama Tower, the tallest building in Indonesia completed in 2015 with 5 basements and 63 floors, 300 meters tall. TATA's success over the past 38 years is due to its employees' dedication and commitment to achieve outstanding job completion, excellent customer service and safety program that complies with ISO 45001. Every project conforms to quality standards in accordance with ISO 9001 by exercising total integration at every stage from studying the design and planning through to construction and maintenance. Its promise of "turning Vision into Reality" makes TATA consistently strive to deliver the promise to its customer.

TATA aims to continue to grow and adapt to the rapidly changing business environment, investing unsparingly in the quality of human resources and civil engineering technology.

To be a customer-preferred and trusted contractor, best in class in the premium market segment to deliver stakeholders’ desires.

Registered under PT TATA NUSANTARA INDAH, the company commenced its business on December 17, 1984. It occupied a rented 70 square-meter modest office with only 5 employees on the payrol

Ir. Gunawan Djojoutomo and Franciscus Bing Aryanto are the outstanding entrepreneurs who founded the company. Both started out the business with strong confidence toward achieving a successful future.

In 1985, TATA was trusted by PT Tatas Mulia (Cipta Rasa Primatama), a food factory in Pulogadung Industrial Estate to renovate lockers and strengthen steel structural columns. It was a very simple project considering its size and complexity. Not compromising on delivering what TATA promised, the project was the company’s proof of delivering customer satisfaction where the quality and service of work performed was outstanding.

On April 17, 1985, the company felt the necessity to change its name from PT TATA NUSANTARA INDAH to PT TATAMULIA NUSANTARA INDAH, is later known as TATA. The word of mouth spread positively as TATA in its first four years of operations successfully built its first portfolio of ten projects, such as factories, office buildings, warehouse and printing shop. The turning point of TATA’s history began in 1992 when the company was entrusted with the project to build the assembly hall for Non-Aligned Movement Summit (KTT Non-Blok). Now the building is known as the Jakarta Convention Center. It was such a challenging project, indeed, as the company had to complete the project in a limited time frame of 9 months. This building was designed to house a large number of world leaders.

Then, it became very crucial that this project be accomplished with a high quality result and within the set time frame. It was crucial because it bears the name of Indonesia in the eye of an international summit. In other words, Indonesia’s reputation was at stake. TATA, with a strong determination of its professional and competent people, managed to complete the project one month prior to the due date. ‘another TATA’s project’ means another commitment to delivering our best with quality as an inseparable source of our service excellence. Through this trusted brand, TATA is able to relate to its customers. In addition to its name that serves as an icon to the company, its promise of “turning Vision into Reality” is what makes TATA unique. This what makes TATA consistently strive to deliver the promise to its customers.

The quality of TATA’s people, the solid teamwork, and the commitment to live the values of the company will make it possible for TATA to produce quality results to the highest standard possible. Customer satisfaction is important, however, TATA realized that it’s not enough to just simply satisfy the customers. TATA would like to take extra miles in doing its business and to provide customers more than just satisfactory results. TATA is committed to taking every effort to understand the dreams of its customers and to turn the customers’ visions into reality.

With the strengthening force of the leadership team, TATA was confident enough to expand its business by establishing a presence in Surabaya, East Java. On August 31, 1999, TATA established a branch in Bali. The opening of TATA Bali was a proff that the company had escaped the crisis unscathed.

If quality is the primary key, it requires some standards to measure, ensuring that they meet the needs of customers and other stakeholders while meeting statutory and regulatory requirements.

It’s not easy to get certified and therefore it needs to be well maintained and recorded, because prior to the renewal of the ISO certificate, the ISO auditor must be satisfied that the company being assessed has implemented some set of requirements. In 2018, TATA certificate has been renewed to ISO 9001:2015.

Another important aspect is the Health and Safety at the work place. In line with one of the company’s mission - “to commit in preserving a clean, healthy and safe working environment”, TATA has seriously taken this matter into account. Recognizing the need to control and improve health and safety performance, TATA decided to implement the internationally applied standard for occupational health and safety management systems and was certified for ISO 45001:2018 (Occupational Health and Safety Management Systems) & ISO 14001:2015 (Environmental Management System). 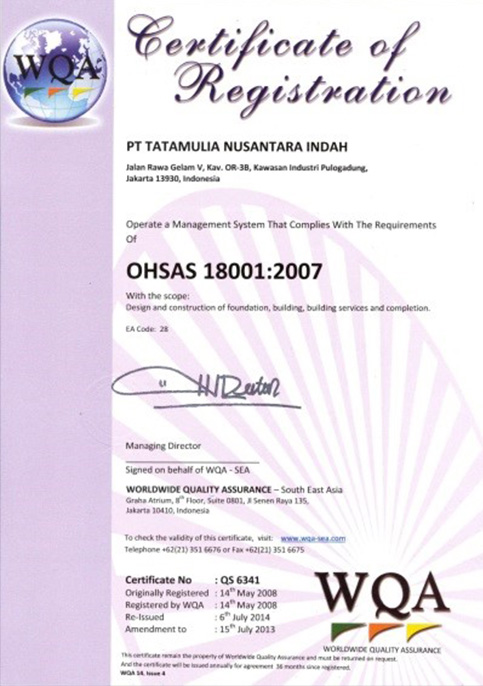